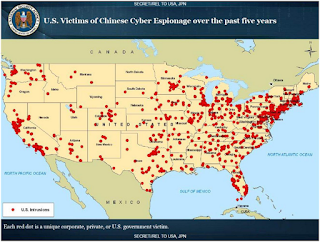 After years of operating in the shadows, cyber weapons are making their presence known in conflicts across the globe.

An NSA-provided map of the United States depicts more the 600 cyberattacks from China over the past five years, making the nation look like a well-hit target from the shooting range.

On December 23, 2015, presumably Russian-led cyberattacks against Ukraine's electric grid took out power to 230,000 citizens in the dead of winter.

The U.S. Navy is concerned enough about China's aggressive moves in the South China Sea to resume training its sailors in navigation using the sextant after a 25 years absence, all in the case of Chinese-led cyberattacks which disable shipboard digital navigation systems.

What is going on here?

Offensive cyberweapons have become increasingly recognized as a must-have capability for protecting and advancing national interests. The result, according to a recent report in The Wall Street Journal, is a "near-frantic and destabilizing global digital arms race" with more than two dozen countries actively building their cyber caches.

Iran's cyber strategies are of particular concern. Whether it be the destruction of some 30,000 Saudi Arabia national oil company computers which came closing to bringing the organization to collapse or continuing attacks against U.S. banking online networks and most recently the breaching of the Bowman Avenue Dam in New York, Iran makes little secret of its cyber reach or ambitions.

As stated recently in the Financial Times, Iran's cyber capabilities have matured from just one more option in their toolkit to a strategic military capability for projecting power. Iran, the article states, is "poised to do something with cyber that will change the way the world looks at it."

How are these escalating global cybersecurity risks going to play out? We don't know. But we do know there is little sense of urgency and even less tangible U.S. strategy to deal with such imminent threats.

In a recent U.S. Senate testimony, asked if he were concerned enough about potential cyber grid attacks to categorize them as acts of war, Lt. Gen. Vincent Stuart replied that if the military had a "much fuller definition of the range of threats in cyberspace it could then begin thinking (emphasis mine) about such consequences."

Homeland Security secretary Jeh Johnson stated his lack of concern when quoted in Ted Koppel's book "Lights Out" as saying that he just doesn't believe such (cyber) attacks will happen.

With this level of denial in full force, the next depiction of attacks against the United States may well be that of a tattered, empty shell, hollowed out from sea to shining sea.