Are Cyber Barbarians at Our Gates? 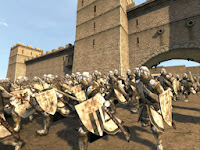 Continually puzzled by why America’s cyber defenses do such an inadequate job of actually defending, I journeyed to Manhattan this past weekend to hear what a select gathering of global cybersecurity experts had to say on the subject.

With my mind spinning two days later from complex chart images, PowerPoint bullets and spirited discussions, I said my goodbyes and made my way to the elevator. It was only once I was in the taxi to midtown, mind roaming free, that the collective impact of the discussions began to synthesize and take form.

That’s when a sense of dark foreboding began to sweep over me. Here’s why.


To our point: If cyberattacks cannot be clearly defined, how can dangers be prioritized so that defenses can be deployed accordingly?

With events in the Middle East increasingly boiling over, such retaliatory attacks against America – most of which we will have no defense for – will only continue to rise.


Cyber defense is clearly an emerging discipline in its infancy. The question is: When will the capabilities of such defenses begin to even closely match the rapidly evolving cyber threats that make them necessary?

While we wait, these increasingly dangerous cyberattacks will continue their assault.

The cyber barbarians are not just at the gates. They have busted their way through – and we are woefully defenseless.

FIRST LOOK: Are we heading toward segmentation of the Internet? What are the implications for cybersecurity? See my analysis in an upcoming post.